Albania Rally 2017: Contrasts Under the Shadow of the Mountains

The Albania Rally is one of the most tradition-laden rally events in the Balkans. Since 2006, organizer Edvin Kasimati has built up the rally in the green heart of southeast Europe. In the beginning, only 40 participants of mostly Albanian heritage raced, then in 2011 the event grew to its high point with almost 200 participants and a more international flair.

However, the event’s organization was unable to handle the increasing number of riders and suffered from a reputation for being disorganized. But Kasimati has worked on improving the event and it shone in 2017 with his detailed preparation, a good road book, and plentiful helping hands. The rally included around 70 motorcyclists alone dueling for the top spot in seven classes, along with about 30 four-wheel vehicles in three classes: Jeeps, SSVs, and quads. There’s something for everyone at this rally! 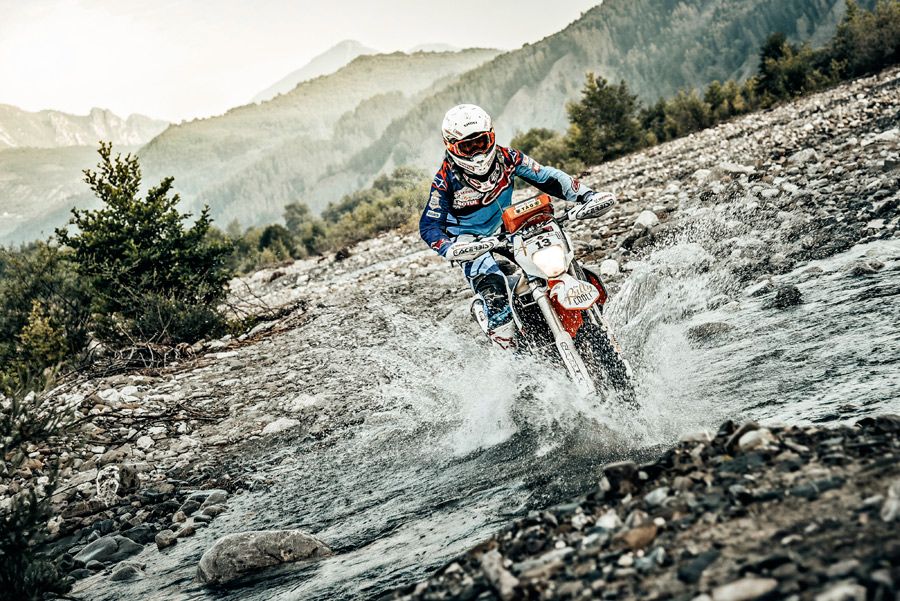 Almost a third of Albania’s 2.8 million inhabitants live in the capital city of Tirana, where the event starts and ends. Albanians have only recently begun to own cars, thanks to the fall of Communism in the early ’90s. But as a result, there’s considerable traffic madness in Tirana. Rules followed by the rest of the Western world go unnoticed here.

Albania is on a long journey toward a modern market economy. Almost 500 years under the Ottoman Empire and 45 years of Communist isolation following World War II have left their mark. It’s therefore no surprise that travelers find a land untouched by Western civilization, at least outside the confines of Tirana. The people of the mountains still live traditional lives with horses, donkeys, and homemade cheese, while the younger generation is moving to Tirana to seek out greater opportunities. 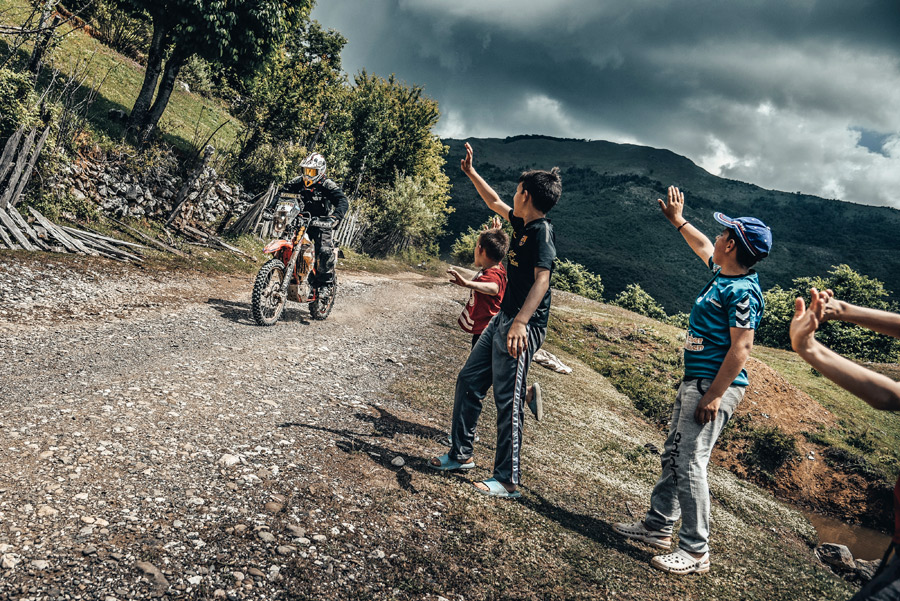 The opening ceremony for the Albania Rally was a moment for the locals as well as the participants: clapping hands, laughing children, happy faces, and TV cameras. What would otherwise be an everyday amateur rally elsewhere is a big deal here. The stages ranged from 100 to 500 kilometers, with longer ones always following shorter routes. Thus, there was a bit of rest built in for the riders, despite its reputation for being the hardest rally in the Balkans.

Following the prologue, racer Anastasiya Nifontova told me a bit about her life. The Russian has been active in motorcycle racing since 1999. In 2015, she successfully finished the Africa Eco Race, in 2016 rode the Albania Rally with a two-cylinder large enduro, and this year was at the Dakar in South America. She lives in Moscow with her partner where she raises her two children and runs a KTM and Husqvarna shop. But even professionals are susceptible to injury. On the night of the first stage of 380 kilometers, I came back to the bivouac after a long day of rain, mud, and a bunch of rocks. These conditions are typically child’s play for Anastasiya, but in the connection at the end of the stage, one of the Albanian car drivers turned in the middle of the road without signaling. Unable to miss it, she broke a bone near her collarbone, bruised a rib, and ended her rally, a real misfortune. 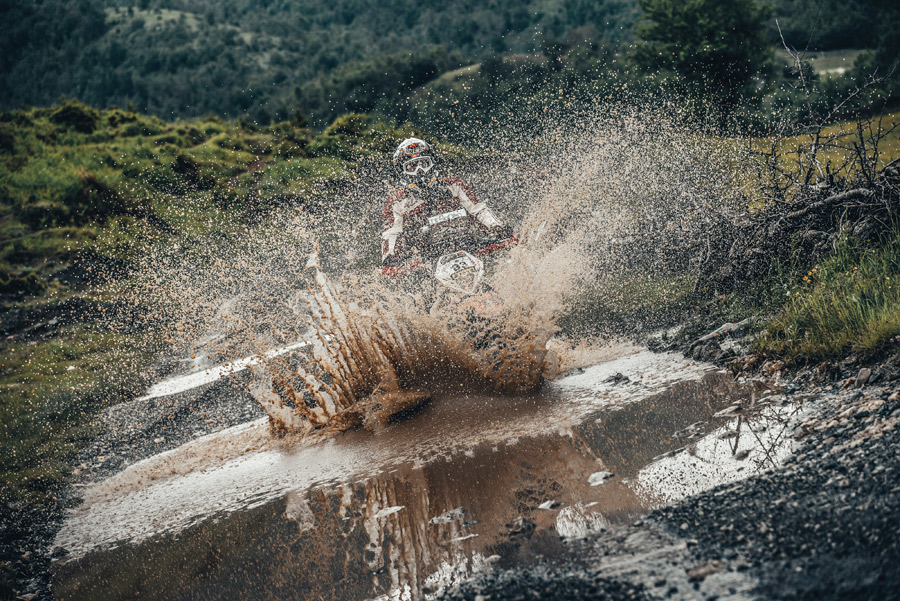 Meanwhile, the rally caravan had made its way to southern Albania. The first bivouac after Tirana was in Progradec on the south shore of Lake Ohrid and from there we went through the wild landscape of southern Albania toward Voskopoja. The route took us into forests with rocky trails washed clean by rainwater. My machine was heavy, and it became even more so as the fuel pump gave out, since I had to add more gas to the tank to keep the carburetor happy. The weight I was carrying, including my camera gear, bogged me down, and I got to see firsthand what it’s like to ride enduro with a heavy motorcycle. Finally, I arrived at the mountain plateau at 1,600 meters. Breathing in the fresh air and fragrance of wet grass and seeing the panorama calmed me down.

The view from the bivouac in the mountains of Voskopojas was one of a kind. A wonderful old house surrounded by forest and mountains made for an even more beautiful setting. The rain added to it, creating water flows down the rock paths. In the hotel room there were only bunk beds. The lights flickered until finally going out, something that seemed to happen regularly in Albania. The drivers had to lock their vehicles in a “parc ferme” (closed parking) for the night and weren’t permitted to work on them at all. A large dining hall which served traditional Albanian food brought together riders who would otherwise have been working on their machines. Everything seemed to fit together at that moment, with a sort of harmony and contrast under the shadow of the mountains. 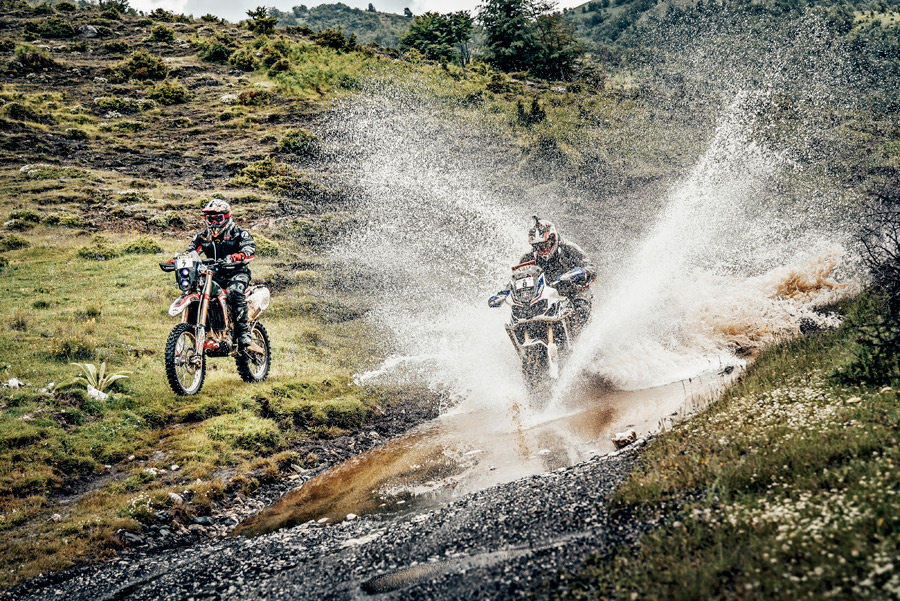 It was almost two o’clock in the morning when I at last looked at the time. I quickly sorted through some film material and checked the rally results of the last days. For the light motorcycles it was Christian Pastori leading the field, whereas Italian Ugo Filosa with an Africa Twin was at the top of the big bike class. Filosa and his Africa Twin had reached cult status. The Italian run with the sort of people who never just do anything part way. However, if there was a machine out there that wasn’t a fit for the muddy Albanian roads, it was the Africa Twin. Filosa didn’t mind, and simply rode on, no matter what rattled on his bike. He’d kept it running through “Malle Moto,” traveling every summer from rally to rally, planning photo tours during the down times in Italy. That’s living out your passion to the fullest!

I struggled to wake at 5:30 in the morning. It was already light out and the next stage wound through the mountains to Borsh, on the Mediterranean coast. The beach was well suited for a bivouac and was an oasis of calmness. The rally equipment stayed here for two nights. The last day was the longest, more than 440 kilometers ahead, with fatigue already present. Before even getting to the special stage, the riders had to first get through the first 180-kilometer connection stage, where even the “normal” roads between the villages hadn’t been paved and were in miserable condition. This played out for me with a flat back tire. No problem, I thought, but later I still had to be bailed out by one of the locals, due to a problem with an inner tube. I asked him what I could give him for his help and he answered, “Just come fishing with me the next time I go.” And again, I lived another moment where Albania grew nearer to my heart.

The flat tire cost me some time. If I wanted to capture most of the drivers on film I needed to ride directly to the end of the special stage and start there. Just as before, the panorama took my breath away. The solitude, the tranquility, and a lack of sleep set me in a sort of trance where I forgot about time while waiting for the riders with my camera on standby. With the sounds of a motor, flying rocks, dust… I realized that Christian Pastori had just flown by. 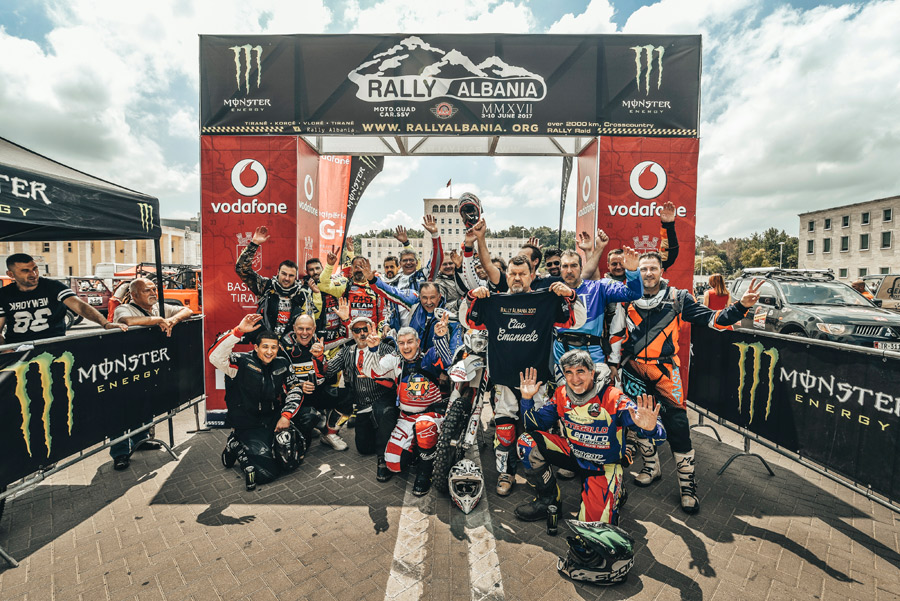 At the end of the special stage I met Uwe and Dominik Detering. We knew each other from Morocco and it was a treat to see this father-son duo in their rig at the rally. Uwe’s navigation electrics faltered throughout the race, and Dominik led them through the eternally rocky garden of Albania as they struggled with the conditions. As with all the others at the rally, they lived their own little adventure, within the atmosphere of friends and family, in a contrast-laden country with a moving history that all too often suffered unduly under Western prejudices.

The circle closed on the podium in Tirana. Hands were shaken, fists directed to the sky, and trophies handed out. In the class of the light bikes Christian Pastori was the winner, followed by Vasilis Boudros and Sebastian Kaluzny. For the big bikes, my favorite, Ugo Filosa, had to give up the top spot to Roberto Baratelli. But what really counted was the spirit of the event. Organizer Edvin Kasimati, said it well, “It’s all about a collective adventure for everyone in perhaps the best off-road paradise of the Balkans.” RallyAlbania.org

Bastian Brüsecke, who grew up around motorcycling, believes in choosing the right tool for the job—whether it’s written articles, photography, or film. His goal is to bring stories to others in such a way that will motivate them to get out there and experience the adventurous life for themselves.

He’s a member of Rally Cool Photographers, a collective of adventure travelers, photographers and storytellers. Their office is the deserts, high mountains and bivouacs in the middle of nowhere. They live their dreams and aim to capture moments that inspire others. MotoVenture.de


This article was originally printed in the January/February issue of Adventure Motorcycle Magazine.