The Baja Rally is Born 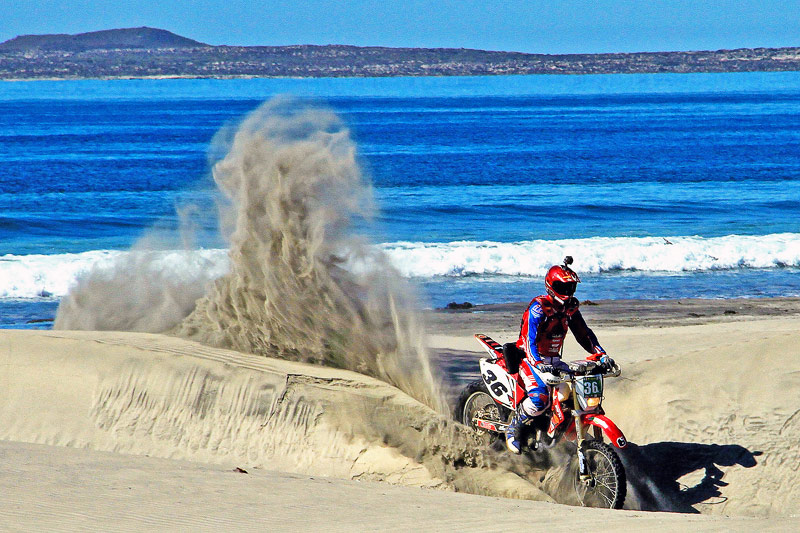 It came and went in a flash, only six months in the making, yet the participants raved about the success of the first rally-raid in Mexico’s Baja California held last October. So, why all the commotion?

The Baja Rally offers two totally unique adventures in one. It’s an unprecedented opportunity to build a world-class event in one of the most diverse and dynamic landscapes on earth. The sport of rally-raid in North America is hugely under represented, as evidenced by the shortfall of North American media presence at the Dakar Rally. Thus, Baja’s legacy as the world’s oldest and longest point-to-point racing region saves its place in the history books. Many who have come to flourish in Baja’s traditional arena are now looking for something more challenging, and the added allure of navigation definitely sweetens the pot. As a result, the totally unproven concept of the first motorcycle-only, navigation-based rally on the world famous Baja Peninsula managed to sell out to 32 entrants in just 36 hours.

Until now, Baja racing has been dominated by a handful of individuals, families and small dynasties, who enjoy their foothold in this barren and unforgiving landscape. The barriers to new entrants are many, and it’s traditionally been a long shot for the newcomer to get involved. Conversely, the Baja Rally is designed to level the playing field. And, in this kind of terrain, where anything can happen, the navigation element makes racing much more exciting. “In normal off-road racing a 10-minute lead is something you just don’t give up,” Quinn Cody, former Dakar contender, explained at the finish of Day One. “ But out here, that 10 minutes can go pretty quick if you make a navigation error.” Cody finished Day One with the lead by 10 minutes over Andy Grider.

When it came time for the ribbon cutting and the first green flag to drop, big-time Baja and Dakar names like Grider, Cody, Roeseler, Steele and Suesse showed up to test their mental endurance on the first 185 miles of secret routes guided only by a paper road book, compass and odometer. “The field is leveled for a Baja race,” explained Baja Rally chief, Scotty Breauxman. “What used to be a very predictable field in traditional desert racing is now a toss-up with rally. So many things can happen with the navigation where a leader can lose a few positions with a single error.”

Quinn Cody flourished from the first mile as he passed NORRA champion, Octavio Valle, at the onset and gained time against Andy Grider. Ned Suesse and rally rookie Cameron Steele both made passes and gained time on the field in the early morning warm-up stage of 52 miles. As the riders reached the start of Stage Two, the top five had shaped up into a worthy battle with Nino Rojas and Mike Johnson chasing Roeseler, Suesse and Grider. Cody’s lead widened deep into Stage Two. But, Suesse and several others struggled with an ambiguous road note and lost hours getting back onto the correct track. Meanwhile, five finishers had reached the bivouac at the El Paraiso Hotel in Colonet.

After stretching legs and minds on Day One, Sunday’s Stage Three marked the start of the 127-mile rally sprint to the finish on the dunes of San Quintin. The bikes lined up before 7 a.m. on a wide, graded road just outside of Colonet, and started eastward into a rising sun and toward the mountains of the San Pedro De Martir. Cody’s lead held while Grider, Cameron Steele and fellow rally-rookie, Chilly White, followed the canyon of San Rafael in pursuit of the leader. 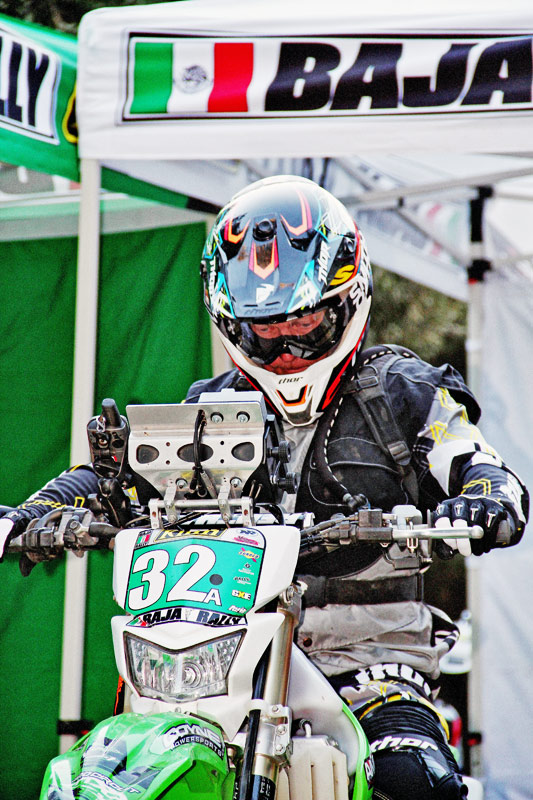 Meanwhile, in back of the remaining field of 33, were “Mr. Baja” Larry Roeseler and Anna Cody, riding together as two of the last to leave the line. Roeseler’s return to rally (he rode the 2004 Dakar Rally) was marred by penalties from Day One for not recording his own tracks for scoring and compliance. So, he decided to team up with Quinn’s sister Anna Cody, who is famous in Baja for being the first woman to solo the Baja 1000 on a motorcycle. The two rode the entire length of Stage Three until Cody’s Honda CRF250X gave out on a 10-mile stretch of sandy beach near the finish. Not one to give up easily, Anna borrowed a bike from the rescue teams so she could finish her journey in honor of her fallen friend, Jimmy Stocker #208, who passed away racing earlier in the year.

Noted journalist racers, Cameron Steele and Chilly White, competed against each other down to a final fight for the podium. Both rally rookies learned their navigation quickly and rode to the top of the field after Day One. Cameron nearly won the event but lost to Grider by a mere six seconds. Chilly was equally enthusiastic about the prospects of rally in Baja, calling it “the coolest thing ever.”

The Baja Rally offers a very unique opportunity for both the sport of rally and the people of Baja California. “Our first rally was more of a shakedown for a longer and more adventurous rally we are planning for the future,” Breauxman concludes. “Now we have the recipe and formula to create a cultural exchange between the hosts of Baja and the visitors looking for adventure. Our rally is a cultural event disguised as a motorcycle race.”